Introduction
The Office of the Chief Economist of EBRD (European Bank for Reconstruction and Development) is conducting a programme of studies relative to the economic impact of labour migration on transition economies. One such study will focus on Eastern European migration to Italy. The EBRD therefore entrusted the survey company CE&Co to conduct a survey of migrants in Italy in order to collect data on loss of human capital for the countries of origin and on the assimilation of human capital in the host country. The Fondazione Rodolfo Debenedetti is also collaborating to the project, providing scientific and technical assistance.

The survey: target and sample size
The survey consists of 1.000 interviews, face-to-face, carried out in a sample of 8 Italian cities (Alessandria, Bologna, Brescia, Lucca, Milano, Prato, Rimini and Verona) among the following segments of population:

The aim of the survey is to interview both legal and illegal migrats. The interview length is of about 40 minutes. It includes a computer-assisted interview and paper questionnaire involving a short test with questions on reading, comprehension and logic skills.

The second wave
In May 2010, the questionnaire was expanded with 19 new questions to investigate on religious views, integration levels and accidents at work.

The Fondazione Rodolfo Debenedetti has coordinated the realization of 300 new interviews, with the support of the Fondazione Alma Mater and the Carlo Erminero&Co.:

In order to be able to obtain scientifically relevant analyses of immigrants’ integration levels according to their religious views, it was necessary for the population interviewed in the second wave to be half Christian and half Muslim.

Timing
The census of sampled residential blocks has been carried out during September-October 2009. The first wave of interviews was conducted between October and November 2009, while the second wave was conducted in May 2010.

The sampling procedure
The population of reference for this research is fairly unknown, especially if illegal migrants are to be included among interviewees.  Furthermore, the number of immigrants is very small in comparison with the total number of residents in Italian cities: the foreign population in Italy is about 5% of the total, and only 16% of immigrants are of European origin, hence the population of the former two groups together - eastern Balkans and new EU members - represents only 0.8% of the total Italian population (source Istat, 2007). Our research project tries to overcome these difficulties through a sampling process divided in various steps. The sampling procedure involved: first, an extraction of primary resident units based on an “area sampling criterion”; then, a second extraction based on a proximity criterion to the primary units; finally, as an additional strategy, the so-called “snowball sampling procedure”, that may be used in the final part of the survey in order to increase the number of interviews from particular hard-to-trace segments of population.

The sampling aimed at both giving a representive sample of migrats living in Italian Northern cities and reaching particularly hard-to-trace segments of the migrant population (such as illegal migrants). It involves three different phases.

In the first phase, a purely geographical criterion was adopted in order to increase the probability of including illegal immigrants in the sample (administrative data include only legal immigrants). The 8 cities have been dived into sectors. Some of the sectors were selected for interviews based on a PPS (Probability Proportional to Size) sampling procedure. Then, in each sector, we carried out a random selection of urban blocks (blocks of first selection). The blocks were defined as a portion of urban surface that is built-up and continuous, i.e. not interrupted by areas for traffic circulation or allocated for public use. They have been chosen randomly from the official city map released by city councils.

Example: one of the selected sectors in Milan (Sector "Stazione Centrale"). The red dot corresponds to the urban block A census of the residential units in each block has been then carried out in order to count the number of dwellings and households that occupy them as well as the country of origin of residents.

A systematic sampling of people to be interviewed in each block has been carried out. The aim of our survey was to collect data especially about immigrants coming from three different geographical areas: Western Balkans, New Member State of the EU, and outside the EU. Therefore, in determining the final sample of the immigrants to each category was assigned one third of the sample. When the household was constituted by multiple adult members aged between 18-65, the individual to be interviewed was selected randomly. In the case of more than one eligible individual in the household, only one will be chosen for the interview.

In case of refusal the closest eligible person in the same block was contacted. In case of absence of the interviewee, the interviewer was instructed to make a second, and if necessary, a third call back in different days/hours.

The blocks of second extraction, differently from those of the first one, are not be chosen randomly. They are identified through a formal criterion of proximity to those blocks of first extraction in which the share of dwellings occupied by immigrant households with respect to those occupied by italian households, proves to be greater than a predetermined figure. In particular, a block of second extraction was included in the sample if a block of first extraction had one of the following features:

As a result, the likelihood of extracting blocks contiguous to others in which the percentage of migrants proves to be high will be doubled, and a significant part of the sample has been constructed by maximizing the presence of immigrants.

To fill the sample with individuals belonging to particular hard-to-trace segments of the population (like illegal immigrants) up to our desired quotas (see above), a third procedure was followed: snowball sampling

This methodology consists in the selection of the individuals among the contacts (i.e. friends, acquaintances...) of other individuals already in the sample and belonging to these hard-to-trace segments. We specifically asked for places like shops, religious places, parks etc. where it was easier to find peple in these segments, and we asked the interviewer to conduct in those places a supplementary sampling.

This has been necessary to adequately represent the migrants from NMS and especially to represent illegal immigrants, as they are hard to be contacted without intermission by their family members or acquaintances.

The first wave questionnaire was prepared by the OCE of EBRD and the Fondazione Rodolfo Debenedetti. The second wave questionnaire was written by the Fondazione Rodolfo Debenedetti and the Carlo Erminero&Co.  The interview were usually conducted in Italian. For that reason, problems of comprehension may arise since not all migrants will have complete mastery of Italian. The problem is addressed in two ways. Firstly, the questionnaire has been translated in some foreign languages (English, French and Spanish) and translations are available in paper format during the interview (although the final skill test will always be in Italian). Secondly, the survey company recruited and trained some migrants and foreign speaking collaborators as interviewers.

The fieldwork was entrusted to about 40 interviewers, with an average assignment of 20 interviews each. 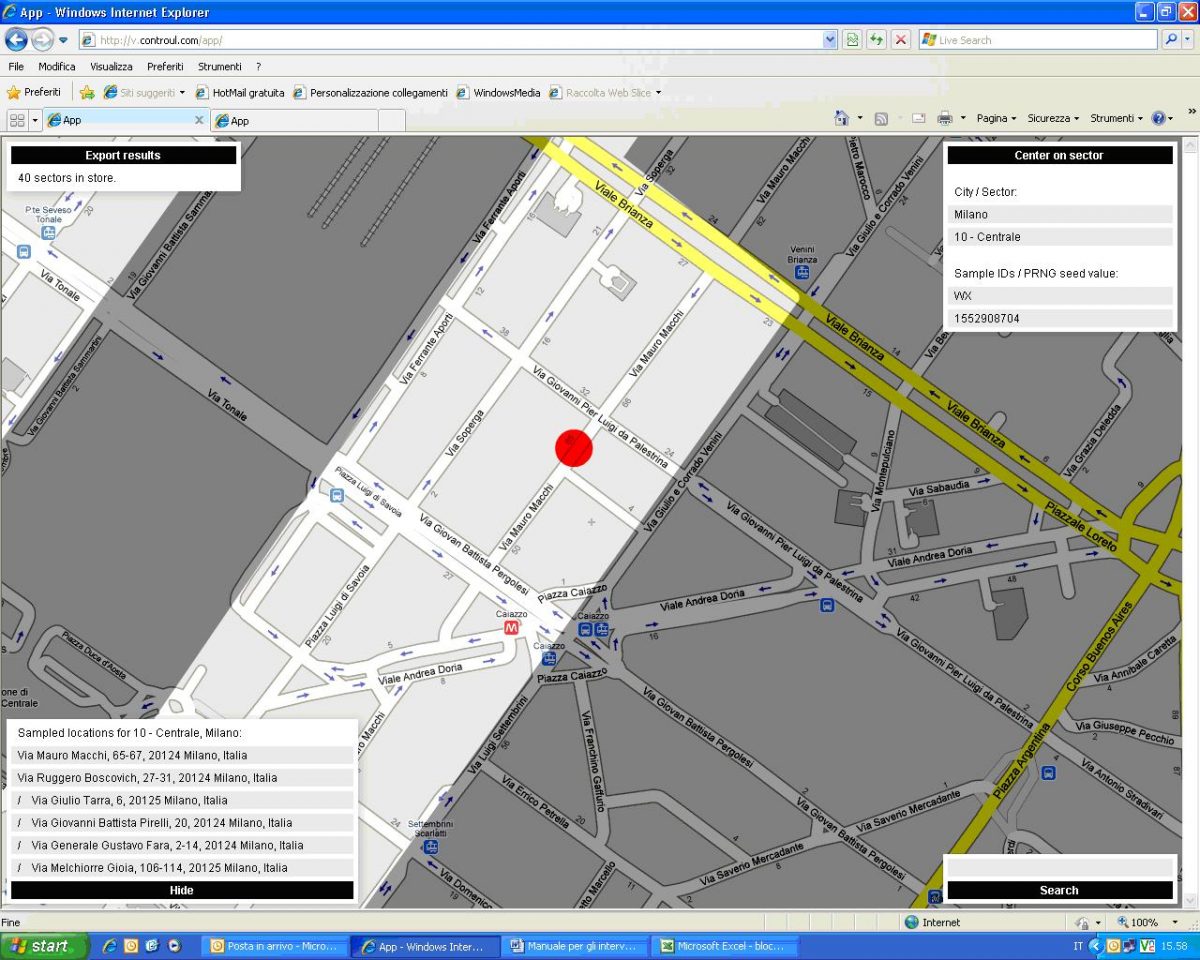