Details and buy
The book “Executive Remuneration and Employee Performance-Related Pay: A Transatlantic Perspective“, edited by Tito Boeri (Fondazione Ing. Rodolfo Debenedetti e Università Bocconi), Claudio Lucifora (Università Cattolica Milan) and Kevin J. Murphy (University of Southern California) has been published by Oxford University PressSummaryThe recent financial crisis has created a public outcry over top-executive pay packages and has led to calls for reform of executive pay in Europe and the US. The current controversy is not the first – nor will it be the last – time that executive compensation has sparked outrage and led to regulation on both sides of the Atlantic. This volume compares US and European CEOs to trace the evolution of executive compensation, its controversies and its resulting regulations. It shows that many features of current executive compensation practices reflect the, often-unintended, consequences of regulatory responses to perceived abuses in top-executive pay, which frequently stem from relatively isolated events or situations. Regulation creates unintended (and usually costly) side effects and it is often driven by political agendas rather than shareholder value. Improvements in executive compensation are more likely to come from stronger corporate governance, and not through direct government intervention.

The volume also examines the effects of incentive schemes and the patterns of performance related pay both within and across countries. It documents a number of empirical regularities and discusses whether government should intervene to support the implementation of incentive pay schemes. It argues that it makes little sense to undertake reform without detailed simulations of the effect on the economy under alternative economic scenarios, based on sound analysis and extensive discussion with labour, management, and government decision-makers.

In particular, the book: 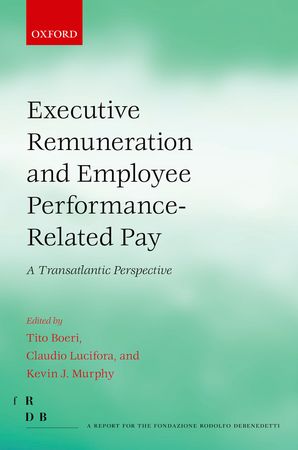